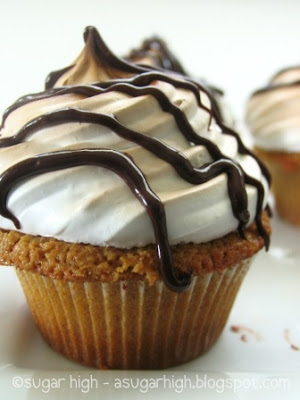 I'm sure you've seen these before. They're everywhere! A classic campfire treat turned into a fluffy cupcake. I adore s'mores. I have to have one (two...three..) everytime I'm around a campfire. Even when I'm not camping, I still eat s'mores toasted over the stove.

I don't really like cake. BUT. I'm a huge fan of the lighter, fluffier, portable cupcake. As you can guess, once I saw this dessert- a combination of two things I love- I wanted to try them right away. 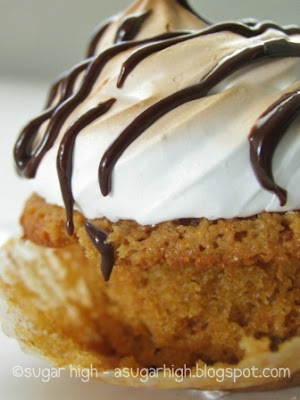 This cake is awesome. It's the fluffiest cupcake I've ever had. These also have the perfect graham cracker flavor, because the recipe  doesn't use much flour, but instead uses crushed graham crackers. Even though these do not rise very much, I would strongly suggest that you don't fill the cups more than half full. I've made these twice now, and both times I've tried filling the cups ¾ of the way. But, this just causes a hanging lip to form on the cupcakes.

Did I mention how heavenly these smell while baking?

I absolutely love these cupcakes plain, just the way they are. But if you really want a s'mores cupcake you can go ahead and top them with some yummy marshmallow frosting and chocolate. You could use a kitchen torch to toast the top of the marshmallow, but if you're a poor girl like me and you don't own a fancy torch, you can just stick them under your oven's broiler for a few seconds. These taste amazing! Definitely the best S'more I've ever had. :) 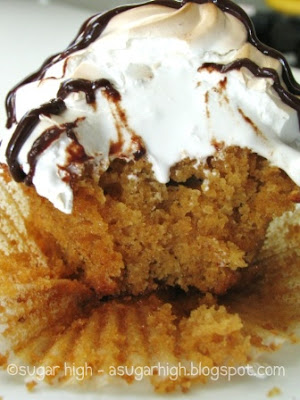 In a small bowl combine the crumbs, flour and baking powder; set aside.

Beat the butter and the sugar in a mixing bowl until light and fluffy. Add the eggs one at a time, beating well after each addition. Add the vanilla.

Bake at 350°F for 22-25 minutes or until done. Cool in pans for 15 minutes. Remove from pans and cool completely on a wire rack. Top with marshmallow frosting. Garnish with chocolate shavings, or melted chocolate.

Place egg whites, sugar, and cream of tartar in the heatproof mixing bowl. Set over a saucepan with simmering water. Whisk constantly until sugar is dissolved and whites are warm to the touch, 3 to 4 minutes.

Remove bowl from saucepan, and beat using a whisk attachment, starting on low speed, gradually increasing to high, until stiff, glossy peaks form, 5 to 7 minutes. Add vanilla, and mix until combined. Use immediately.

Tips:
*Fill cupcake liners somewhere between ½ and ¾ of the way full.
*Make sure you beat the marshmallow frosting to STIFF PEAKS. Otherwise the frosting won't set, and you'll end up with a cupcake that looks like this... 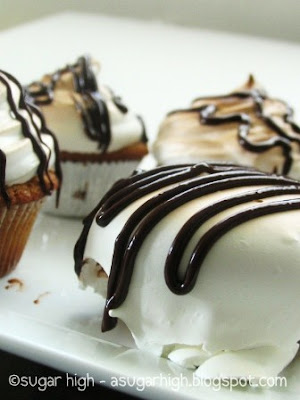