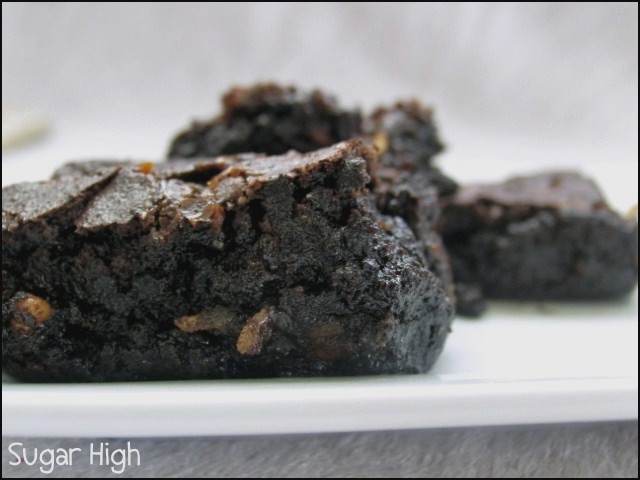 Brownies are one of my favorite desserts.
I've tried a lot of brownies in my 21 years.
Boxed, Home-made, Cakey, Thin, Fudgy, Chewy, Thick, Nutty, Fruity, Frosted.... I think blondies are the only brownie variation still on my 'to eat' list.


But, none of them, NOT ONE, compares to these brownies.
To me, and the Man of the house, these are by far the BEST brownies I have ever sunk my teeth in.
THE BEST! 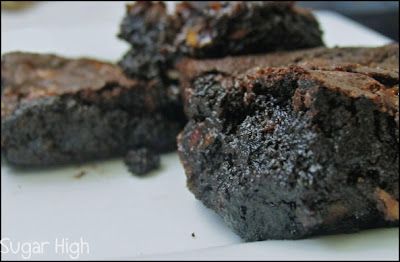 In this recipe I use Hershey's special dark cocoa to get the deepest chocolate flavor possible. The chocolate is so dark that these brownies turn out almost black!
And the texture. Very chewy. Super moist. The moistest brownie I've ever had, you don't even need a glass of milk to wash it down.
OH, I can't forget about the special topping...
Creamy caramel infuzed with rum, mixed with sweetened coconut and pecans. It's all swirled into the dark brownie batter before baking to create one fantastic tasting brownie with several wonderful textures.
Of course, the brownie is delicious without the topping. But, you'd really be missing out on one hell of a brownie without it! :) 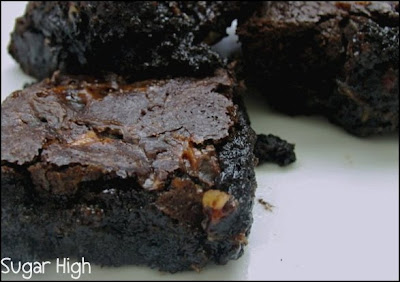 Now, that I've shared my favorite brownies with you, I want to know what your favorite is! Do you prefer boxed brownies? Maybe you like your brownies super thick and fudgy? Or, perhaps you're a fan of fluffier, cakey brownies? (To you, the Man says, might as well eat chocolate cake!) Do you think brownies and frosting go together? Do you like bits of nuts, or dried fruit mixed in? Maybe your dream brownie hasn't even been done yet!?
I want to know! Tell me your favorite brownie, or tell me if you don't even like brownies!(but, then I'd have to call you crazy...)

While stirring, quickly add ½ cup of the warmed cream (it will bubble furiously, just keep stirring!) and butter until well combined. Stir in the last ¼ cup of cream and rum, if using. Reserve 1 cup of caramel for later use. Take remaining 1 cup of caramel and stir in coconut and chopped pecans.

*I used Captain Morgan Tattoo which is a dark rum that has a great flavor. It's very sweet and fruity with a very slight hint of raspberries, and a light caramely flavor. This rum is my favorite, it tastes great straight (no chaser needed, thanks), and gives a fantastic boost of flavor to baked goods. :)  Read more about Tattoo here.

In large mixing bowl combine melted butter, sugars and vanilla. Add eggs one at a time mixing well after each addition until thoroughly blended. 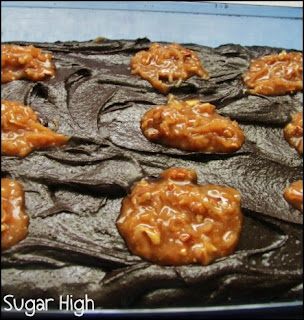 Take a butter knife, or toothpick, and lightly drag through batter to create a swirl pattern with topping. 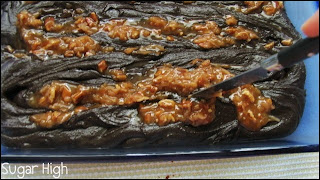 Bake in preheated oven for 35-40 minutes, or until center is set. Let cool completely before cutting.