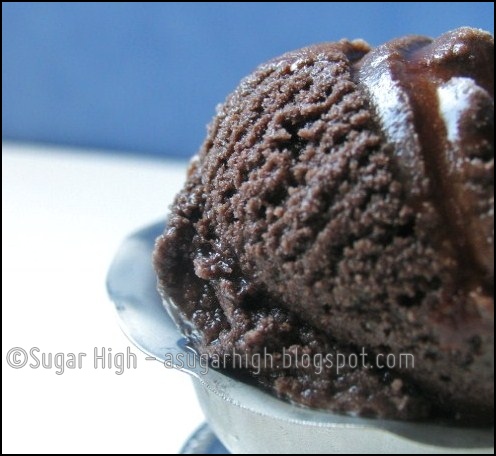 Ice milk is basically a frozen mixture of sugar and milk. It's a great alternative to ice cream because it uses less ingredients, no need to cook, and you don't need an ice cream maker.

This chocolate ice milk is delicious! I thought it was going to be full of ice chunks, and hard as a rock. It's actually really creamy! It almost has a 'soft' texture. I gave it some extra beatings with the mixer during freezing to break up the ice crystals so it would turn out smoother. I used coffee in the chocolate sauce gave this otherwise-plain chocolate ice milk a fantastic flavor boost, turning it into a decadent chocolate sundae.

Ice milk is so yummy and simple to make that it will now be my go-to dessert on those hot and lazy summer days.. Plus, you could probably get the same result just using chocolate milk as you would using the recipe I've provided, which would make a one-ingredient dessert! :)

Whisk sugar and cocoa in large bowl. Slowly whisk in milk and vanilla until dry ingredients are dissolved. Pour into 8x8" baking pan and cover. Chill in freezer 2 hours, or until nearly frozen.

Score surface with knife and cut into chunks. Transfer to food processor or blender and process until smooth and creamy. Pour into resealable freezer container. Freeze 2 to 3 hours, or until solid, pulling out once or twice to blend. Doing this will break up big ice crystals, making your ice milk smoother.

Combine sugar and cocoa in small saucepan, stir in coffee. Bring to a boil over medium heat, stirring. Reduce heat to low and cook 8 minutes, or until slightly thickened.
Let cool slightly and stir in vanilla extract. Serve over scoops of ice milk.