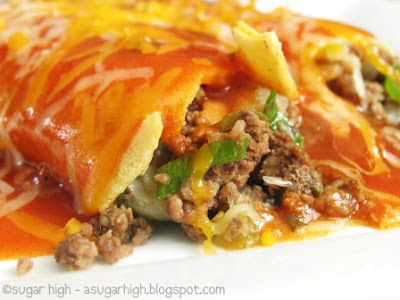 Enchiladas are my favorite Mexican dish. Growing up, my family ate a lot of them, so often that enchiladas were the first dish I knew how to cook on my own. They're great because you don't really need a set recipe, just meat, tortillas, and sauce, then you can throw in whatever else you like.

I really like this recipe from Pioneer Woman.
For one it doesn't use just canned sauce itself; it combines the canned stuff with chicken broth and spices making it way better. Two, it gives the meat filling texture and great flavor by adding onions and chiles. Three, it uses corn tortillas that are gently fried and then dipped into the red sauce. Dipping the tortillas was definitely the hardest task to accomplish for this dish, but the end result was well worth it. 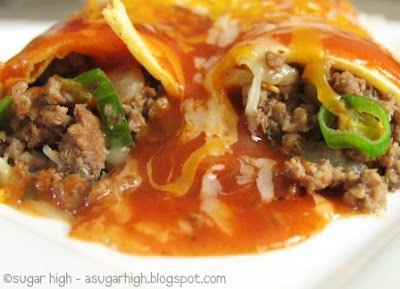 These Enchiladas are very good. I made these for dinner while my two younger sisters were staying with us, and they both loved them! I know I've done something right when my picky-eater sister gobbles down something I've made, like she did that one time.

If you follow the recipe as is, it doesn't make a very spicy dish, so the only thing I changed to this recipe was adding a small can of hot tomato sauce. I like my Mexican food to be SPICY. The spicier the better!  I also added green onions to the meat filling. Next time, I'll make these with chicken, just cause I like it better than beef(in this case I used ground turkey). :) 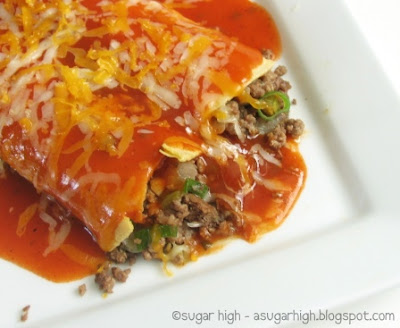 
The Sauce-
In a large saucepan over medium heat, add oil and flour and whisk together to make a paste, cooking for one minute. Pour in the red sauce, chicken broth, cilantro, salt and pepper. Bring to a boil. Reduce heat and simmer 30-45 minutes.

The Meat-
Brown the meat with onions in a skillet. Drain off fat. Stir in 2 cans diced green chilies and seasoned salt. Set aside.

The Tortillas-
Heat canola oil in a small skillet over medium heat. One by one, using tongs, fry tortillas in oil until soft, not crisp – about 30 seconds per side. I found this took quite a bit less time to do. You may need to sacrifice a few tortillas before you get it down right. Remove to a papertowel lined plate. Repeat until all tortillas have been fried.

Assembly-
Preheat oven to 350°F. Pour ½ cup red sauce in bottom of baking pan, spreading evenly. Dip each tortilla into red sauce, then remove to work surface. Spoon meat, a little grated cheese, a little black olives, and green onions in the center of tortilla. Roll up and place, seam down, in baking pan. Repeat until pan is filled. Pour extra red sauce over enchiladas. Top with remaining cheddar cheese.

Bake for 20 minutes or until bubbly. Sprinkle cilantro over enchiladas before serving.


Tips:
* For spicier enchiladas, use 1 can of El Pato hot tomato sauce.
* For healthier enchiladas, use turkey instead of beef.
* Be very gentle when frying and dipping the tortillas. I was having problems with my tortillas breaking apart. I ended up frying them over a lower heat for half the time stated in the recipe. You just have to sacrifice a few tortillas to find out what works best for you.