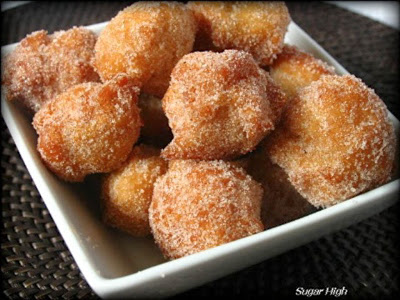 Ooh, how I LOVE donuts. I drool like Homer every time I think of donuts! Krispy Kreme are especially my favorite. Warm. Soft. Crispy. And Creamy. Yuumm. Nothing beats a fresh donut alongside a hot cup of joe... yet another addiction of mine.
Well, these donuts were no krispy kreme, plus I didn't have any coffee, but they were still tasty. The whole process from start to finish took me a little while to do... 2 hours to be exact. Yep, two hours! The actual ingredient prep only took maybe 10 minutes, but I'm very appliance starved, I have no deep fryer, which means I had to cook these little suckers in a small pot that would only allow 4-6 donuts at a time depending on size. Someone more fortunate than me, who has a deep fryer, will be able to fry these up MUCH faster. It was worth the time, though. The house smelled soooo good. I love recipes like this that just stink up every room, nook, and cranny. I like to step outside for a few minutes then walk back in just to have those delicious smells smack me in the face. 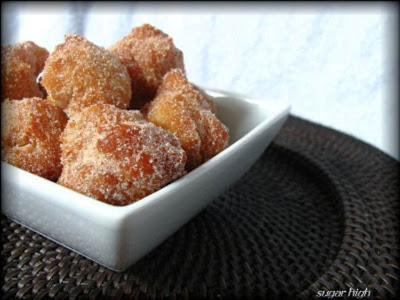 Anything that smells that good has to taste good, right? Oohh yes. Yes, Yes, Yes. Like bite-size apple fritters. They were pretty cinnamon-y because I have a thing for cinnamon and can't help adding a little extra than what's called for, plus I covered them with cinnamon-sugar. It wasn't til the last batch that I thought to dust them with powdered sugar, which is what I will do next time. You MUST try one while it's still fairly warm. That's the best way because while they're warm they're still very crispy on the outside, and the inside is soooo soft and, well, warm! Nothing beats a warm donut... where's that coffee?! The first batch I made I did rounded Tablespoons, which came out pretty big (like 2 bites big). I decided that I wanted them smaller, so I switched to rounded teaspoons. This didn't help time wise, but it did give me perfect little bite-size balls that were easy to pop right in your mouth. That's actually a bad thing for me... if I don't think about it I'll easily pop 20 of these things in my mouth in just a few minutes time!
-Jess

Directions-
In a deep-fat fryer heat oil to 375° F

In a medium bowl combine flour, baking powder, salt, and spices; set aside. In a large mixing bowl, cream butter and sugar. Add eggs one at a time, mixing well after each one. Beat in applesauce and vanilla. Add flour mixture alternately with milk, beginning and ending with flour. Stir in chopped apple.

Drop teaspoonfuls of batter, a few at a time, into hot oil and fry until golden, about 1 minute each side. Drain on paper towels, and roll in sugar while still warm.