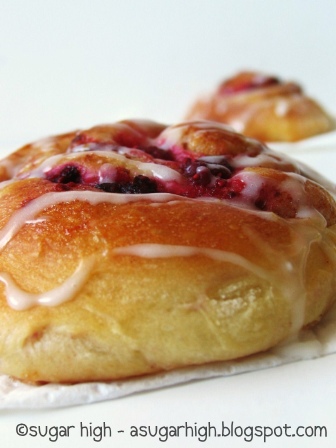 What would a food blog be without a couple disasters?

S#!t happens, especially in the kitchen. Even more so when you're a self-taught homecook and almost everything you cook is a first time experience.

But, that's why I thought this recipe would go over smoothly. I've made cinnamon rolls before, only a couple times. The first was years ago, middle school, I had made cinnamon rolls from a recipe I got from school. Having never made them before, I was pretty nervous about the end result. They turned out beautifully. They were rolled perfectly, tasted great, and were very large with the perfect chewy texture.

I made this same recipe about 2 years ago. I was nervous again because it had been a while since I last made them. I had trouble rolling the dough, so I forced asked my mother nicely to help me. They turned out good, though not as great as the first time for some reason.

Now here I am again, craving a big chewy cinnamon roll.
However, this time, not so nervous. I have a little experience with them, and I have a recipe from a reliable source on hand. I figured everything would go smoothly. It started out with a craving for the gooey spiraled treat. After not being able to find my old recipe, I searched the internet and my dozens of recipe books for that one recipe that stood out to me. After hours I finally settled on a recipe from the Lion House Bakery cookbook. I love Lion House (I've said it before). They have wonderful recipes that always turn out for me.

I wanted to add something extra to the cinnamon rolls. The first things that came to mind were raspberries and lemon. I don't usually second guess myself, plus it's not a very good idea to argue with a woman, so I just went along with that idea. :) 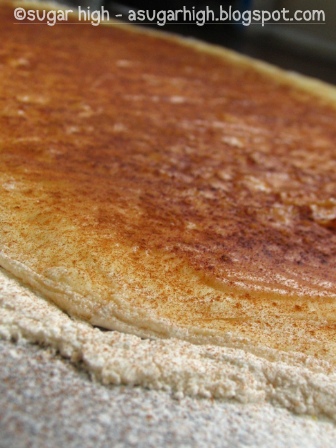 I made the dough by hand, and let it go through its first rising. It rose beautifully.
Now, on to rolling out the dough. This is the part that where I start to get intimidated because I've never had luck with rolling any kind of dough. It always sticks to the countertop no matter what I do, tears apart, and I end up overworking it. I heavily floured my work surface and began to roll. It seemed to be fine.
I topped it with butter, sugar and cinnamon, then topped it with raspberries and lemon zest. Lookin good so far! 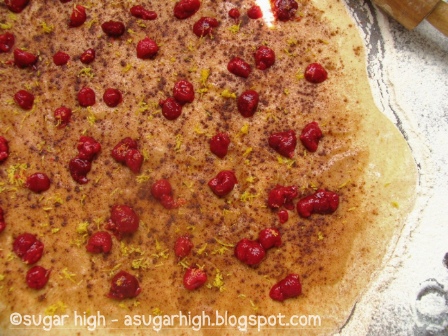 That is.. until I started to roll up the dough. It turns out the dough did stick to the counter, making it very difficult to roll. I had to scrape it away from the counter while trying to roll it at the same time. This caused a few tears in the dough, and didn't allow me to roll it as tightly as I should have.

In order to have a perfectly shaped cinnamon roll, it has to be rolled tightly. Mine were very loose, and pretty messy thanks to the combination of sticky dough and excess moisture from using frozen raspberries (next time I'll stick with fresh raspberries). Nonetheless, I set them out onto baking sheets to finish their final rise. They rose great, and were really big (thank you, loose rolling). 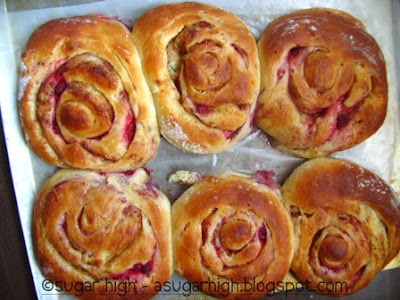 During baking alot of the cinnamon sugar melted out (thanks, again, looseness), which made the rolls stick to the parchment paper. And, they were GIGANTIC! I was able to gently pry one of the beasts away from the sheet to see if it tasted better than it looked.

Trust me when I say that these raspberrry lemon rolls were really delicious! The dough was very light and fluffy. Almost a melt-in-your-mouth kind of softness. Like I said, there wasn't much cinnamon sugar left in them, but the raspberries and lemon made up for that. Raspberries add a great tartness; perfect when paired with lemons. 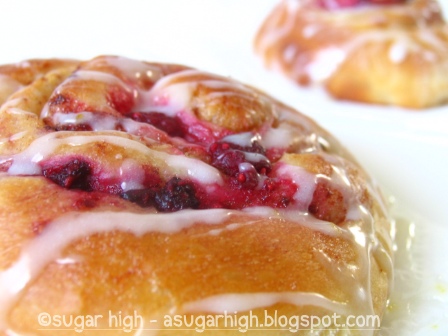 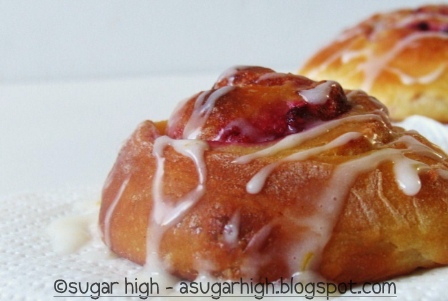 I made a lemon glaze to top. If you're one of those people who don't like icings on cinnamon rolls, please, DO NOT pass on this glaze. It really gives the rolls that final touch that just pushes them right over the edge!

These Raspberry Lemon Cinnamon Rolls were fantastic, despite nearly being a disaster. I will DEFINITELY be making these again very soon. Hopefully I'll have better luck handling the dough and rolling process. 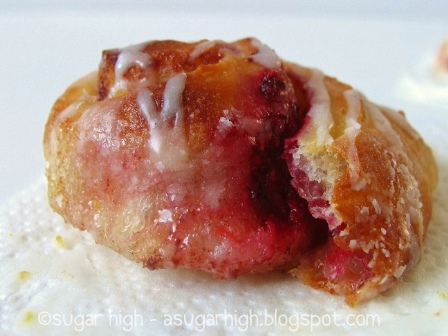 Knead dough in bowl for 10 to 15 minutes (this will be messy); OR if you have a stand mixer you can place the dough hook on it and mix at low speed for 10 to 15 minutes.
The dough will be very sticky. Lightly grease a second large bowl with oil, place dough in the bowl turning to completely cover with oil. Cover bowl with plastic wrap and let rise until doubled in size, about 1½ hours. (look below for make-ahead instructions)

Turn dough out onto a well-floured surface and roll out into a rectangle, slightly less than ½-inch thick. Brush with melted butter. Sprinkle with sugar and cinnamon. Combine raspberries with lemon juice; spread raspberries evenly over dough. Sprinkle with lemon zest. Roll up rectangle lengthwise and cut into 1-inch slices. Grease a cookie sheet or line with parchment paper. Place rolls on cookie sheet, cover with plastic wrap, and allow to rise until doubled in size, 1 to 1½ hours.

Bake at 375°F for 10-12 minutes. After baking, let rolls cool slightly before glazing.


Directions-
Mix all ingredients together in a small mixing bowl, beating until light and well mixed. Pour over warm cinnamon rolls.


Make-ahead Instructions-
If you want to make the dough a day ahead, mix dough according to directions. Instead of allowing dough to rise, place it in an oiled bowl, cover with plastic wrap, and refrigerate overnight. When ready to use, remove dough from refrigerator and follow directions for rolling out, rising, and baking. Allow longer time for the shaped rolls to rise because dough will be cold.
Baked by Jess @ 9:08 AM